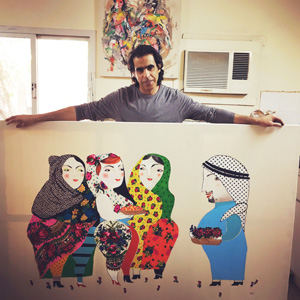 Ahmed was born in Bahrain in 1968. He has been a member of the Bahrain Contemporary Art Association since 1989. He won 1st prize in The Society Annual Exhibition in 2001.

His first group exhibition was also held in the Society in 1989. Later, his works travelled to many countries in the region in solo and group exhibitions, including the Bangladesh Biennial in 1993 & 2002; Asilah Cultural Season, Morocco, in 1990, 1992, & 1994; Bahrain Cultural Days in Damascus, Syria, in 2008; and Taqaseem group exhibitions I, II in 2010 & III in 2012. He has also exhibited in Kuwait, Dubai, Lebanon, Qatar, Saudi Arabia and Bahrain. Some of his works are collected by the Bahrain National Museum. There will be a solo exhibition of his work at Al Riwaq Art Space in April 2016 as part of the Spring of Culture festival.

For his first collaboration with YallaHabibi, entitled “Nature”, Ahmed created a “circular” cushion artwork, where all his characters form a circle so that there is no up or down.
Instagram: @ahmedananart